2014 Moleben for the Unborn has begun! 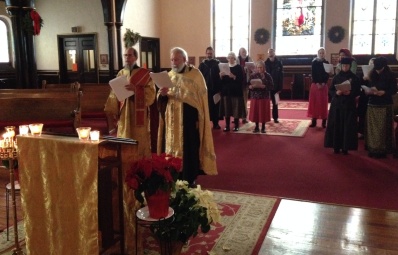 “And He spake a parable unto them to this end, that men ought always to pray, and not to faint; saying, There was in a city a judge, which feared not God, neither regarded man: And there was a widow in that city; and she came unto him, saying, Avenge me of mine adversary. And he would not for a while: but afterward he said within himself, Though I fear not God, nor regard man; Yet because this widow troubleth me, I will avenge her, lest by her continual coming she weary me. And the Lord said, Hear what the unjust judge saith. And         shall not God avenge his own elect, which cry day and night unto him, though he bear long with them? I tell you that he will avenge them speedily. Nevertheless when the Son of man cometh, shall he find faith on the earth?” (Luke 18:1-8)

I am blessed to be a member of a parish that takes the time even just once a month to pray as a church for the victims of abortion, which Mother Teresa of Calcutta described as the “greatest destroyer of peace today”.

Let us not grow weary but be persevering in this battle through the grace and power of our Lord Jesus Christ.  Let us extend our hearts and hands of compassion to the weak, the grieving and the wounded that healing may take place and God be glorified through our actions of faith.  As St. James, the Brother of the Lord said, “faith without works is dead.”  Hope to see you all next month!

“Lord Jesus Christ, Son and Word of God,  have mercy upon us sinners.”

This entry was posted in Uncategorized. Bookmark the permalink.